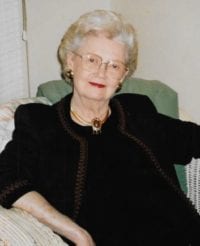 Mrs. Cox was born September 3, 1927, in Longs, SC, a daughter of the late Alphonso F. Parker and Lutie Dorman Parker. After attending Coker University, she and her husband made Kingstree their home in 1947. She worked at Preacher’s Drug Store and Williamsburg County Health Department for numerous years but discovered that ladies’ retail was her true passion. She worked at Silverman’s, Stella’s and the House of Joye. Mrs. Cox was a former member of the Kingstree Pilot Club, Kingstree Garden Club and several bridge clubs. She was a member of Kingstree First Baptist Church and had attended Kingstree United Methodist Church in recent years.

Surviving Mrs. Cox are her daughter, Donna Sue Cox, of Kingstree and several nieces and nephews. In addition to her parents, Pee Wee was preceded in death by her husband, Don Cox, former Sheriff of Williamsburg County, brothers, Alton Parker and A.D. Parker and sister Lucile Parker Moore.

A private family service will be held at a later date. Online condolences may be sent to the family on the obituaries page at www.WilliamsburgFuneralHome.com. In lieu of flowers, memorials may be made to Williamsburg Funeral Home.