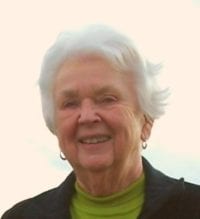 CHAPIN – Memorial service for Neva White Watson, 94, will be held at 11:00 a.m. Saturday, January 4, 2020, at St. Francis of Assisi Episcopal Church. A reception at the church will follow the service. Dunbar Funeral Home is assisting the family.

After living a full life that spanned across 10 decades with precious family and friends, Mrs. Watson died peacefully Sunday, December 29, 2019. Born on January 21, 1925 in Billy’s Island, GA., she was the daughter of the late John Elmer White and Mildred Genita White. She was raised in McBee, SC and was a graduate of Hartsville High School. Neva also attended Coker College.

She and her beloved husband, Bill, were married in December 1963. Neva worked for SCE&G until she, Bill and the boys moved to Chapin in 1969. There, she raised the boys, assisted Bill with running their auto parts store, Watson Auto Supply, and was engaged in many civic roles, in particular, the Chapin Women’s Club. Neva was involved in the Episcopal Church. She and Bill, along with many of their Chapin friends, were instrumental in the creation of St. Mary’s Episcopal Church in St. Andrews and St. Francis of Assisi Episcopal Church in Chapin.

In 1986, Neva and Bill sold the business, and in 1995, they moved to Fripp Island where they enjoyed many rounds of golf and unlimited sunrises and sunsets. They moved back to the Columbia area in December 2008.

Neva was quite the athlete. In addition to golf, she played soccer in college, water skied on Lake Murray, and could often be found taking a fast-paced walk. In addition to her athleticism, she enjoyed a competitive card game of bridge with her friends and wasn’t afraid to skunk her son, Clem, in tennis during his teen age years (Rumor has it, he never played again).

Neva also enjoyed designing her houses, whether it was adding or removing a wall to the existing house or designing the layout of their new homes at Lake Murray or Fripp Island. She was always looking to maximize the view of the water.

Most of all, Neva enjoyed hosting family and friends. Some of her favorite dishes she served up included egg casserole with grits, turkey dressing, cream spinach, and chocolate soufflé.

The family would like to thank the staff of Wellmore of Lexington, All Seasons Hospice, and Right at Home in-home care. The family will be forever grateful for their professionalism, care, and compassion. In lieu of flowers, memorials may be made to St. Francis of Assisi Episcopal Church, 735 Old Lexington Highway, Chapin, SC 29036, or a charity of your choice.

Memories may be shared here.