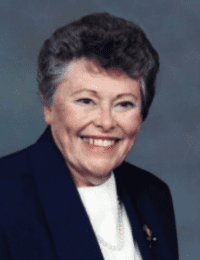 She was born on Sept. 14, 1922, in Charlottesville, Va., the daughter of Hugh and Margaret (Bryan) Burnet. In May of 1939, Peg graduated summa cum laude from Lane High School in Charlottesville, Va. Peg studied pre-med at Coker University in Hartsville, S.C. and graduated magna cum laude in 1943. She attended Western Reserve University in Cleveland, Ohio and studied for a master’s degree in medical social work. Peg married Thomas Collin on March 7, 1944 in Charlottesville, Va. Together they raised seven children. She was a smart, caring, fun and creative mother. She embraced the role of Naval Chaplain’s wife and Lutheran Pastor’s wife. In addition, Peg worked as a case worker for Wisconsin Lutheran Child and Family Services in Milwaukee, Wis. Peg was a member of the Evangelical Lutheran Church of America for 75 years. She was a member of the Military Officer’s Association, American Association of University Women and served as President of Women of the Church. Peg was a volunteer throughout her life. For years she contributed to Oakwood Village on various committees, and she was also an active resident at Good Samaritan Village in Kissimmee, Fla. Through Ezekiel Lutheran Church in River Falls, Wis., Peg was instrumental in support of the Hmong Refugee community. Peg loved writing and was an accomplished genealogist. She wrote many stories of her extended family: The Burnets, Bryans, and Carters of Virginia. She also loved to swim, bike, read, and create a variety of art projects as special gifts to family members. Peg is survived by her children, Thomas Collin of Milwaukee, Carol (James) Polarski of Milton, Margaret (Michael) Huddleston of Martinez, Calif., Mark (Karen) Collin of Middleton, Elizabeth Collin of Cross Plains and Sara (Roberto Saenz) Mead of Tempe, Ariz.; her grandchildren, Rebecca, Peter, Jennifer, Margaret (Maggy), Katherine, Sara, Emily, Christian and Erica; and her great-grandchildren, Chloe, Holly, Nathaniel, Gabrielle, Grace, William, Charles, Amelia, Eleanor and Noelle. She was preceded in death by her parents; husband, Thomas Collin; son, Eric Collin; and daughter-in-law, Kathleen Collin. A memorial service will be held at OAKWOOD UNIVERSITY WOODS RESURRECTION CHAPEL, 6205 Mineral Point Road, Madison, at 1:30 p.m., on Saturday, Jan. 25, 2020, with the Dr. Rev. George Carlson presiding. Visitation will be at Resurrection Chapel from 12:30 p.m. until the time of the service on Saturday. Interment will be at Wood National Cemetery. Memorials may be made to Oakwood Foundation Inc. Online condolences may be made at www.gundersonfh.com . Gunderson East Funeral & Cremation Care 5203 Monona Drive (608) 221-5420