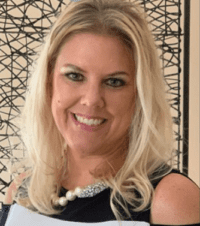 Pate boasts nearly two decades of experience in college athletics, including time as a head coach and assistant coach, director of marketing and promotions, and as a professor of athletics business and marketing. Her coaching experience spans both the Division I and II levels, while her marketing acumen was honed at the Division I level and her teaching expertise covered numerous courses in athletics business, marketing and leadership.

“We are thrilled to have Katie join our team,” Meadows said. “She brings an abundance and diversity of experience from her roles as an administrator, coach and academician in the field of athletics. The breadth of knowledge and perspective she has gained in each of those roles will propel us forward in all areas of our external engagement, including marketing, brand development and our fan experience.

“Her passion to serve, drive for excellence, and belief in our mission and vision makes her the perfect addition to our leadership team and to our entire university community.”

As the leader of Longwood’s external relations unit, Pate will oversee the coordination and strategic planning of the athletics department’s most public-facing units including alumni relations, communications, game operations, marketing and promotions, and ticketing. Those offices make up one of four primary units of Longwood athletics administration alongside the business operations, communications, and student-athlete enhancement teams.

In addition to her duties on the external relations team, Pate will also serve as senior woman administrator. That position, formerly held by Meadows, is the highest-ranking female administrator at every NCAA-affiliated athletics department and conference. The role is to promote meaningful representation of women in the leadership and management of college sports.

“I’m very excited to become part of the Longwood University team,” Pate said. “I knew immediately that the shared strategic vision of director of athletics Michelle Meadows, President Reveley and others I was fortunate to speak with is one I want to be a part of. The institution’s commitment to building a personal connection with fans matches the very reason why I love sports so much, and it’s exciting to step onto an already established foundation of success by the external relations group and the department as a whole.

“Furthermore, I have followed Longwood University from my time as a student-athlete, so I have witnessed Longwood’s drastic growth and have a sincere appreciation for the wave of momentum the school has experienced in recent years. Athletics has absolutely been a key part of that, and I believe we can continue to help elevate the university by building distinctive relationships and creative brand visibility, using unique growth platforms, and committing ourselves to grassroots marketing strategies that further enhance campus and community pride for the institution.”

Pate’s hiring at Longwood is the latest step in a lifelong involvement with college athletics. Prior to her success as a student-athlete and her exploits as a coach and administrator, she received first-hand exposure to college basketball as the stepdaughter of famed former University of Minnesota women’s basketball head coach and Gopher Hall of Famer Ellen Mosher-Hanson.

Like her stepmother, Pate’s diverse career is interwoven by threads of success and effective leadership, as well as a pattern of meaningful community engagement grounded in athletics but leveraged for the mutual benefit of all involved.

A former women’s basketball standout at Coker where she faced off against Longwood Athletics Hall of Fame coach Shirley Duncan’s Lancer squads of the mid-1990s, Pate’s foray into the professional realm of college athletics began as head coach of her alma mater from 2001-05. Also the SWA at Coker, Pate served in those roles until 2005 when she transitioned to Belmont Abbey College, where she was also the head coach and SWA from 2005-07.

From Belmont Abbey, Pate dove head-first into athletics administration as the director of athletics marketing and promotions at USC Upstate in Spartanburg, S.C. With the Spartans – now a Big South peer of Longwood’s – Pate oversaw strategic planning for the school’s athletics marketing, promotions, fan engagement, ticketing, advertising, branding and creative services. Her biggest successes included the sustained growth of the Spartan Army group, new single-game attendance records for the Spartan volleyball program and the creation of a USC Upstate Grassroots Marketing Street Team.

After three seasons with the Spartans, Pate delved back into the coaching circuit as assistant coach and recruiting coordinator at Wingate from 2009-10 before embarking on a seven-year stint on the bench at Lenoir-Rhyne University where she served as associate head coach from 2011-14 and head coach from 2015-17. During that time, she reached the NCAA Division II Tournament and secured a South Atlantic Conference championship alongside head coach Todd Starkey and capped her three-year tenure as head coach by leading the Bears to a 17-12 record in 2016-17. During that time, she also served as an adjunct professor at the Charles M. Snipes School of Business & Economics, teaching courses in sports marketing, business marketing, marketing communications and marketing research, and would later return to that role in the spring of 2019.

Pate left Lenoir-Rhyne for the Division I level beginning in 2017-18 when she served as associate head coach at Marshall. Along with her coaching duties with the Herd, she also oversaw substantial growth in the program’s booster club, increasing donations and donor participation by 150 percent in a single season. As part of that, she launched the Play4Kay campaign that raised donations in excess of $3,000 for the Kay Yow Cancer Fund.

Pate’s final stop on the sideline came at Georgia State in 2018-19 where her role as assistant coach saw her help the Panthers to a program-best 11 wins in the Sun Belt Conference while also continuing to impact her student-athletes beyond the court. She initiated a partnership with the GSU WomenLead, a nationally recognized organization dedicated to the professional development of young women within the academic community.

Throughout her career, Pate has acquired a number of relevant degrees, certifications and professional associations, including a Bachelor of Science in exercise science and a Bachelor of Arts in Spanish from Coker College; a master’s degree in business administration from Webster University; a leadership certificate from the Columbia University Center for Coaching Excellence; and professional memberships in the Women’s Basketball Coaching Association, National Association of Collegiate Marketing Administrators and National Association of Collegiate Women’s Athletic Administrators.