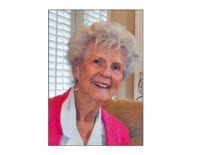 Fredrica Stell passed away peacefully Thursday, Feb. 11 during her 94th year of a glorious life. She wanted folks to know that her death was not COVID-19 related. Freddie, as she was affectionately known, was born in Elizabeth, Louisiana, Oct. 27, 1926, the youngest of eight children born to Mary Deaton and Hiram Benjamin Wadsworth of Moore County, N.C.

At age two, her family returned to their native N.C., settling in Clarkton. Freddie played high school basketball, attended the UNC Junior Playmakers summer theatre program, was state secretary of the N.C. Beta Club, received the DAR Award before graduating as Salutatorian of her Clarkton High School class. She subsequently played basketball, soccer and was in theatre at Coker College. To her mother’s dismay, she married at age 19 to William (Bill) Turner of Whiteville, where they settled and built a home for their seven children, and where she continued to reside until her death.

During her early years in Whiteville, she worked first in the business office of Carolina Telephone Company and then briefly at Whiteville Elementary School before deciding to stay at home with her first child and subsequent children. Her husband, Bill Turner, died at age 32, leaving her to be a single mother of her seven children, ages 10 and under. She was very involved with her children’s activities: school, church, scouts, camping, little league ball games. When the youngest child entered kindergarten, Freddie began working as the secretary at Edgewood Elementary School, before later moving to become the secretary to the superintendent at Whiteville City Schools, where she worked for more than 30 years.

Freddie was a long-time, proud member of the First Presbyterian Church of Whiteville, becoming one of the first female elders, a member of the choir, a deacon, and a circle member. She was elected a board member of the committee on ministry for the Coastal Carolina Presbytery.

A very civic-minded person, Freddie served as chairman of the Whiteville Planning and Zoning Board, was a trustee at Southeastern Community College, a member of Southeastern Community College Foundation, past president of the Columbus County Arts Council, member of the Columbus County Theatre Association, received the Woman of Achievement Award from the YWCA in Wilmington, a member of the Columbus County Mental Health Association and was appointed by the N.C. Governor to the N.C. Division of Mental Health, Developmentally-Delayed and Substance Abuse Commission and served 15 years on the Area Mental Health Board. In her spare time and during her retirement years, Freddie’s love for theater led her to direct 10 community plays and participate in eight additional ones.

In 1998, Freddie married the love of her life, Samuel C. Stell (Sam), whom she described as “the world’s best husband.” Sam quoted William Wordsworth to describe Freddie: A perfect woman, Nobly plann’d; To warn, to comfort, And command. And yet a Spirit, Still and bright With something of Angelic light.

Freddie’s greatest joy in life was her children, “All of whom seem to like me. We have wonderful times when we’re together.” In addition to her first and second husbands, she was preceded in death by one of her sons, Robert (bobby) Forrest Turner.

She is survived by her other six children and their spouses, Bill and Elizabeth Turner, Dick and Susanna Turner, Jean Turner, Craig and Chris Turner, Andy Turner and Michele and Dan Murphy; two step-children, Janet and Cam Stell; 11 grandchildren; and 11 great-grandchildren.

Due to COVID-19, a memorial service will be planned at a later date.

Donations in her memory can be made to the First Presbyterian Church of Whiteville.