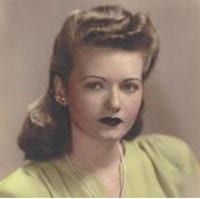 Phyllis Haar Meier died September 29, 2018, at Bradley Creek Health Center in Wilmington, N.C. following a short illness. Phyllis was born on January 7, 1927, in Wilmington to Henry Haar and Sadie Stubbs Haar. Phyllis’ mother, Sadie, had previously been married to Dick Easterling and they had four sons, H.D., Roy, Harry and Houston. Dick died tragically in 1922 leaving Sadie to raise the four boys on her own. Sadie later married Henry Haar and they had one child, Phyllis. Phyllis and her four brothers were raised at 205 N. 4 th Street in Wilmington. Her father worked for the Atlantic Coastline Railroad and her mother operated Haar’s Tourist Home at the residence. They housed many workers at the shipyard during WWII. Phyllis was adored by her brothers and there was never any reference to being step or half siblings. Phyllis graduated from New Hanover High School in 1945. Her class prophecy in the yearbook was: “Just elected Public Glamour Girl No. 1”.  Phyllis attended Coker University in Hartsville, S.C., and East Carolina Teacher’s College in Greenville, N.C. Upon her return to Wilmington she fell in love with F.L.”Tanky” Meier, Jr. and they were married at the Grace Methodist Church in Wilmington in 1951. They were married for 61 years until Tanky’s death in 2013. She missed him every day until the last. The most important thing in both Phyllis and Tanky’s life was their family. They raised two children, Charles and Anne, who like their parents, graduated from New Hanover High School and lived their adult lives in Wilmington. Phyllis (and Tanky) gave them the gift of time and unconditional love. Likewise, they  loved and nurtured  their grandchildren, Charlotte and Hayley, and looked forward to every moment spent with them. Until her death Phyllis loved to send cards and notes to her family and friends; no holiday or special occasion passed without a note from Phyllis. She greatly enjoyed family gatherings and made a point to attend each one. Phyllis loved all children and after her own children left the home, she became a teacher’s assistant at Blount and College Park elementary schools. Phyllis was blessed with many friends and extended family. Summers were spent at Wrightsville Beach at her aunt Gesine Doscher’s beach house on Charlotte St. She was an active member of the First Presbyterian Church where she taught Sunday School and was a member of a number of womens’ circles. She was an excellent bridge player and enjoyed playing late into her life. The family would like to thank the staff of Assisted Care at Home and the Bradley Creek Health Center for their kind and compassionate care. A special thanks is also extended to Kathleen Snyder who provided much needed care and companionship to Phyllis over the last three years. Phyllis is survived by her son Charles Meier and wife Terri of Wilmington, her granddaughter Hayley Meier of Chapel Hill, N.C, her daughter Anne Hoy and partner Herb Harris of Wilmington and her granddaughter Charlotte Hoy of Winston-Salem, N.C. She is also survived by her sisters-in-law Hilda Simon of Wilmington and Jacqueline O’Neil of Key Biscayne, Fla., her nieces Susan Withrow of Ocean Isle Beach, N.C., Jo Duckworth of Lakeland, Fla., Susan Ramsey of Wilmington, Cathy Eden of Chapel Hill, N.C., and Molly Baringer of Key Biscayne, Fla., her nephews Henry Meier, Jr. of Kalamazoo, Mich., and Richard Meier of Wilmington, her cousin Margaret Anderson of Midlothian, Va., her grandniece Kristin Duncan of Hampstead, N.C., and her very special friend, Rebecca Norman Lawrence, Terri Meier’s mother, of Wilmington.  She was predeceased by her parents, brothers, and a very special aunt, Gesine Haar Doscher. The family will receive visitors on Wednesday, October 3, 2018 from 5:00 p.m. to 7:00 p.m. at Andrews Mortuary, 1617 Market Street, Wilmington, N.C. 28401.  A funeral service will be held on Thursday, October 4, 2018 at 11:00 a.m. at the First Presbyterian Church, 125 S. 3 rd Street, Wilmington, N.C. 28401, with the Reverends Dan Lewis and David Lawrence  presiding. Immediately following the service a reception will be held at the church.  A private burial will be held at Oakdale Cemetery.  In lieu of flowers, the family requests that donations be made to the First Presbyterian Church Chancel Choir.