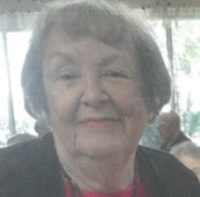 Mrs. Joy Strawn Barbee, 84, passed away Thursday, November 16, 2017, in Concord. A memorial service is scheduled for 10:00 am Wednesday, November 29, 2017, at All Saints’ Episcopal Church. The Rev. Nancy L. J. Cox will officiate. The family will receive friends in the All Saints’ Parrish Hall following the service. Mrs. Barbee was born December 12, 1932 in Union County. She was a daughter of the late Stephen Hasty Strawn and Lila Faircloth Strawn. She was a member of All Saints’ Episcopal Church where she served on the Altar Guild Committee. She also attended Bible Study at Resurrection Anglican Church in Kannapolis. Joy was a faithful volunteer with Cabarrus County Meals on Wheels, the Salvation Army and CVAN. She was a member of the Dogwood Garden Club of which she was a founding member. She was a member of “The Original Club” of Bridge and recently started playing Bridge at Crescent Heights. Joy graduated from Concord High School where she was one of the first Letter Girls, and also attended Coker University and later graduated from Catawba College. If she wasn’t in Concord, she could be found in Carolina Beach. Joy was also known to be a jokester.