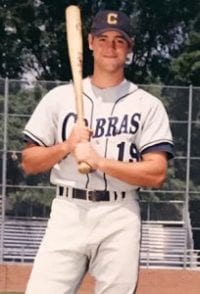 Hal Edwards graduated from Lake City High School in 1993 and participated in basketball and baseball. However, his exploits on the baseball diamond were where he left his mark.

After graduation, Edwards continued his career at Coker University where he continued to excel on the diamond. He was again a four-year starter and letter winner, played in the 1994 College Baseball World Series, was named the CVAC Conference Player of the Week three times, was named the 1997 team captain and MVP, was named to the 1997 First Team All-Southeast Regional Team, and was named a 1997 All-American.

Edwards works with Finance of America Mortgage, LLC and is married to Ashley (Isom) Edwards. The couple resides in Lake City with their five children: Blayne, Mary Ainsley, Jase, Mayce and Maxton.