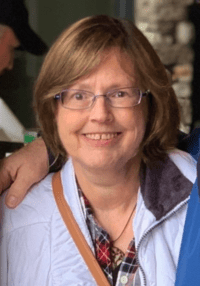 Anne Robinson Fishburne, 58, died on Monday, January 13, 2020. She departed peacefully with friends and family by her side after a severe bout of pneumonia. Anne was born into a wonderful family with five older brothers. She graduated from Coker College with a BA degree in fine art. Anne was also a programmer for Ahold / BiLo. Anne married her husband Benjamin David Fishburne in January, 1986 and the two spent many happy years raising their daughter Sarah, building their home and their business, traveling the world, and hiking the beautiful mountains of the Carolinas. Anne and David spent many years building their business Boda Pipes and Cigars in Greenville, SC. which is still in operation today. Anne is survived by her husband David Fishburne, her daughter Sarah Fishburne Weisenberger (Steven); brothers, David Robinson (Ginny), Ben Robinson (Jackie), Thomas Robinson (Jill) and Walter Robinson; sister-in-laws Cynthia Robinson and Patsy Robinson. She is preceded in death by her parents, John Huske and Norma Elaine Neimuth Robinson and her brother Richard Robinson. A memorial service will be held Saturday, January 18, 2020 at 2pm in the chapel of Mackey Funerals and Cremations at Century Drive. The family will receive friends Saturday prior to the service from 1pm until 1:45pm.In lieu of flowers donations may be made to the American Cancer Society , 154 Milestone Way, Greenville, SC 29615 or The Nature Conservancy in South Carolina, 27 Cleveland St., Suite 203, Greenville, SC 29601. Arrangements by Mackey Funerals and Cremations at Century Dr.; online tributes at www.mackeymortuary.com.