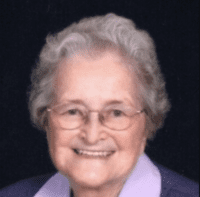 Margaret “Peggy” Warren Smith left this world March 14, 2019.  She was born in Florence, SC on November 28, 1930.  She began her working life as a clerk in Phillip’s Shoe Store in Florience.  Later she was a life guard and swimming instructor at the city pool.  In January 1953 she married Jaeger (Jay) Smith.  After graduation from Coker College (Hartsville, SC) she joined her husband where he was stationed in the Army in Monterey, CA.  They lived in nearby Pacific Grove where she was Playground Director for the city.  While her husband was serving in Korea she returned to SC and taught science in Junior High School.  After Jay’s Army time was over, they moved to Jacksonville in 1956.  When their three children reached school age, she became a substitute teacher.  Also, in LENS program she led environment tours at Carey State Forest, downtown tours about early architecture of Jacksonville and history tours at Fort Caroline.  The superintendent at the National Park was so impressed by her style he hired her as a Park Ranger.  As a teacher she would reward her students at the end of the day with a story.  Her story telling abilities grew to the extent she was invited to the Florida Folk Festival.  She and her husband were at the festival for fifty-one years.  Often their children and grandchildren were included in the performances.  This past spring, they were invited back to the festival to receive a lifetime achievement award.  When her husband retired “Aunt Peggy and Jay” took their stories and songs to schools, libraries and festivals around Florida and into Georgia and the Carolinas, the Philadelphia Folk Festival and the SS Norway cruise ship.  None of these activities interfered with her devotion to her husband and family.  She was a faithful member of South Jacksonville Presbyterian Church since 1956.  Peggy is predeceased by her parents Daniel and Beulah Warren and her sister Betty Morgan.  She is survived by her husband of 66 Years, daughter Gretchen Crawford (Jim), son Dan Smith (Kathy), Daughter Molly Weber (Bob).  Grandchildren Jim Crawford, Jr., (Brandi), Claudia Toney (Rick), Allison Crawford, Justin and Mathew Smith and Adam Weber.  Great grandchildren Ryan and Tyler Crawford, Victoria and Nicholas Toney, Jack and Simon Coffelt.  The family also wishes to thank Community Hospice at St. Vincent’s Southside Center for Caring and Baptist Hospitals for their care.  Peggy has left this world for a better place.  For the many who loved her this world is poorer.