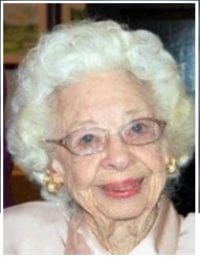 Anyone who was fortunate to know Martha Caldwell over the past 103 years admired her graciousness, determination, friendliness, and faith. One might say that Martha’s life closely followed the lessons she passed on to her family, including “You can’t judge a book by its cover,” “If you can’t say something nice, don’t say anything at all,” and “You can’t change the wind, but you can adjust the sails.”Martha Gunter Caldwell was born April 25, 1917 in Hartsville, SC. She was the daughter of Maude Clyburn Gunter and Charles Walker Gunter. In 1919 her family moved to Gastonia where her father was a cotton broker.She was preceded in death by her parents and her brother, Charles Walker Gunter, Jr. Martha Gunter attended first grade at Willow School, which was on 2nd Ave. in Gastonia. She then entered second grade at Central School and continued her education there. In 1935 she graduated from Gastonia High School (where she was salutatorian). For two years she was a student at Coker College, in Hartsville, SC. She then transferred to the University of North Carolina at Chapel Hill where she received her AB degree in 1939. While there she was a member of Chi Omega sorority.Martha taught at the N.C. Orthopedic Hospital School. During WWII she was accepted into the American Red Cross and was stationed at Camp Butner, NC. Later she was program director for the NC League of the Crippled Children in Chapel Hill.In 1948 she married Dr. Jesse B. Caldwell, Jr., a resident in obstetrics and gynecology at Bowman Grey School of Medicine. They moved to Gastonia in 1950 when Dr. Caldwell opened his practice. He died in 2001.Mrs. Caldwell devoted her life in Gastonia as a homemaker and mother of her four children. She was a lifelong active member of First United Methodist Church, which she joined in 1925. She worked in the PTA programs. She was a member and former president of the Gaston County Medical Auxiliary. Mrs. Caldwell also held memberships in the North Carolina and American Medical Auxiliaries. She was active in the Tea & Topics Book Club, the Review Book Club, and Gaston Country Club. In addition to gardening, Martha enjoyed an interest in travel with her children and husband, whether traveling across the country in the family station wagon (and later towing a travel trailer), sailing or counting penguins in Antarctica.Mrs. Caldwell is survived by children, Jesse B. Caldwell III of Gastonia, Charlie Caldwell (Merrily) of Charlotte, Lawson Caldwell (Curt Sowers) of Charlotte, Martha/Marti Sykes (Andy) of Greensboro; grandchildren, Jesse Caldwell IV (Cate), Drew Sykes (Amanda), Summer Suttles (Chris), Carra Sykes (Lauren Marek), Chandler Caldwell, and Chase Caldwell; great-grandchildren, Graham and Kennedy Suttles, and Jamie Sykes. She is also survived by her special best friend, Johnie Matthews, and her devoted caregiver and friend, Teri Childers. The family extends gratitude to Home Instead and its caregivers for their tireless love and devotion.A visitation will be held on Sunday, November 15 from 3 to 5 p.m. at McLean Funeral Directors in Gastonia. There will be a private celebration of her life (masks required) on Monday, November 16th at 11:00 am at First United Methodist Church in Gastonia. The link to the live stream service is: https://boxcast.tv/view/caldwell-funeral-hmzgi0b8swazz2gnilt0 or visit the First United Methodist Church website for the link. The committal is family only.In lieu of flowers, memorials should be sent to the Youth Ministry at First United Methodist Church, P.O. Box 218, Gastonia, NC 28053.Condolences may be sent online by visiting www.mcleanfuneral.com .