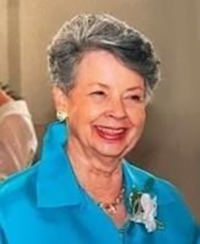 Mrs. Kathleen Kay Lightsey, beloved wife, mother, grandmother, and great grandmother, died on Tuesday, August 17, 2021.
Mrs. Lightsey was born on December 12, 1932, in Columbia, South Carolina, the daughter of Wallace and Mary Kay. She attended public schools in Columbia and graduated from Dreher High School in 1950. She then attended Coker College and transferred to the University of Georgia where she graduated magna cum laude in 1954.
She married Harry McKinley Lightsey, Jr., the love of her life, on June 14, 1952, and together they enjoyed over 53 years of a true partnership in marriage until his death on January 15, 2006.
Following her graduation from Georgia and wedding to Harry, she became active in the communities in which she lived in South Carolina. She was a founding member of the Candytuft Garden Club. She was a devoted member of the Columbia Garden Club and served as President for many years. She also worked for many years on the Trinity Cathedral Alter Guild. She was chairwoman of the Gubernatorial Gala for Governor John West in January 1970. She was a gubernatorial appointee to the Mother of the Year Committee. When Dr. Harry Lightsey became president of College of Charleston, she worked tirelessly at his side to support the growth of the College to a highly esteemed University.
Kathleen always looked for ways to serve her community and help her friends, but she was most proud of her beloved husband, children, grandchildren and great grandchildren. She was much loved by all of her family and friends. We will miss her greatly.
She is survived by her four children: Harry McKinley Lightsey, III, of Columbia, and his wife Mercy; Wallace Kay Lightsey of Greenville, and his wife Marsha; Kathleen Elizabeth Lightsey Ortiz of Gaithersburg, Maryland, and her husband Michael; and Dr. Edgar Glenn Lightsey of Atlanta, Georgia, and his wife Jeannie; her ten grandchildren: Ellen Exia Lightsey Pinson of Leesburg, Virginia and her husband Alex; Dr. Harry McKinley Lightsey, IV, of Boston, Massachusetts; Jacob Glenn Lightsey of Greenville; David Ransom Ortiz of Raleigh, North Carolina and wife Elizabeth; Emma Kay Lightsey of Denver, Colorado; Daniel Martin Ortiz of New Haven, Connecticut; Connor Glenn Lightsey of Austin, Texas; Sarah Morgan Ortiz of Boston, Massachusetts; Suzanne Elizabeth Lightsey of Gainesville, Florida; and Caroline Elizabeth Ortiz of South Bend, Indiana; and also her two great grandchildren: Harper Kay Pinson and Penelope Ann Pinson as well as her sister, Mrs. Mary Kay Rickenbaker.
Funeral services will be held at 2:00 p.m. on Saturday, August 21st, at Trinity Cathedral in Columbia. Burial will follow in Elmwood Cemetery.
In lieu of flowers, the family requests that memorials be made to Still Hopes-Residents Assistance Program, 1 Still Hopes Lane, West Columbia, SC 29169.