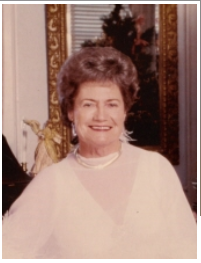 Emily Remington Mt. Pleasant Emily Remington, 103, of Mount Pleasant, left us on July 28, 2020, 24 days before her 104th birthday with her two daughters by her side. Born on August 21, 1916 in Jordan, South Carolina, Emily was the daughter of the late Reverend William Olin Henderson and Mittie Hinnant Henderson.

She was a graduate of Coker College in Hartsvillle, SC and later studied at Peabody Conservatory in Baltimore and the Juilliard School in New York City. Emily spent her life as a professional musician. She was Organist/Choirmaster for the former Grace Episcopal Church now Grace Church Cathedral in Charleston. She was founder and conductor of the Singers Guild for the Charleston Symphony (now the Charleston Symphony Chorus). The chorus was known for the presentation of great choral literature, and the colorful Christmas Concerts for the Symphony. She was an Adjunct professor at the College of Charleston, then later named Assistant professor. She taught piano, Music Appreciation, conducting and served as accompanist for the vocal studios, the College Choir and many college concerts. A charitable fund which now supports the International Piano Series was established in her name by Dr. William Tate. Emily served a term as Dean of the Charleston Chapter of the American Guild of Organists. She was a member of the Charleston Music Club. Both of these organizations have a scholarship in her name. Of her many activities, she worked with Gian-Carlo Menotti when the Spoleto Festival began, accompanying rehearsals and performances in the first two years. She was on the original planning committee of the Piccolo Spoleto Festival in Charleston which began in 1977. After moving to Franke at Seaside, she organized the Remington Concert Series there, in addition to her Christmas and July 4 celebrations for the residents.

Among her many experiences, she accompanied artists for the National Opera in Munich, Germany including James King and Jessye Norman. While living in Germany, she was commissioned by the Army Headquarters in Heidelberg, Germany to be director of the Protestant Institute of Music held each year at the General Walker Hotel in Berchtesgaden, Germany. For this commission she was given the distinction of 1st star General support. She presented many workshops and recitals at American post chapels. Just last year she was named the second runner up as Classical Woman of the Year on NPR’s Performance Today with Fred Child. Before coming to Charleston, Emily lived in Augusta, GA and there she served as Organist/Choirmaster for the Lutheran Church of the Resurrection. She was the founder of the Augusta Choral Society in 1951. In 2001, at the 50th anniversary, she was named Conductor Emerita. For many years she taught at Paine College and at Augusta College (now Augusta State University). She was a founding member of the Augusta Chapter of the American Guild of Organists and also served as the Georgia State Chairman. In 1955, Emily had one of the first weekly LIVE TV shows called In the Music Room where she played classical piano music with commentary. She performed many times with the Augusta Symphony including her favorite piece, The Rachmaninoff Piano Concerto No. 2. Over her entire career she taught piano and organ to countless students.

Emily was married to the late Dr. John Wood Remington, professor of Physiology at the Medical College of Georgia. She is survived by her daughters, Porter Remington of Mount Pleasant and Martha Scharnitzky of Goose Creek; her two grandsons, W. A. “Andy” Scharnitzky, III and wife, Jennifer of Daniel Island and their children, Emily, Matthew and Andrew; John F. Scharnitzky and his children, Alex, Samuel and Abigail of Virginia Beach, Virginia. Emily is also survived by many members of her extended family. A private graveside service will be held at Suttons, SC, the maternal family home. At a future date, a memorial concert is being planned to remember her legacy. In lieu of flowers, memorial contributions in Emily`s memory may be sent to Lutheran Homes of South Carolina Foundation, 300 Ministry Drive, Irmo, South Carolina 29063, 803-749-5110, https://www.lutheranhomesscfoundation.org . or any of the other organizations named above. Expressions of sympathy may be viewed or submitted online at https://www.palmettocs.com . Arrangements are with the Palmetto Cremation Society, 5638 N. Rhett Ave, North Charleston, SC 29406, (843) 722-2555. Visit our guestbook at www.legacy.com/obituaries/ charleston