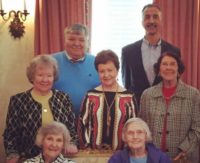 From Mitzi: Dear Long Time Friends, It has been a long time since we entered Coker University as Freshmen…How long?  Since 1949!!!  How can so many years have passed?

Today is a beautiful Spring day in South Carolina. We (my daughters Kay and Jeanne and John and grandson Will) have just returned from beautiful Gasparilla Island, Boca Grande for the wedding of my oldest grandson. John Jayson Gilligan married Katherine “Katie” Fehlig. He is 34 years old and she is 28. This is the first marriage for both!!!  His mother is Laetitia “Lettie” Matthews Gilligan ’76 and daddy John Thomas “Tom” Gilligan.

It is Patricia “Pat” Chapman Huff‘s intention to contact by phone each one in our class this year for new news. She got a head start on me but I helped a little bit. If you were not contacted, we will try to get in touch with you for the next issue.

Jennie Herlong Boatwright is just fine at the present time. Her husband Phillips turned 90 years old in December 2016. He looks good and seems to feel pretty good. She sent a wonderful picture of her family.  She and Phillips used to see Vera Wyndham Helmly ’52 and her husband at Telephone conventions.

When I called Mary Frances Coker Johnson she had just gotten home from therapy as she had broken her knee. She couldn’t put any weight on it for two more weeks. She also has a torn rotator cuff. She is so glad to have her husband Tim to help her. Her daughter Laura and husband live next door and are a big help. They also have three grandchildren. Hopefully she is healed by now. We just can’t be falling anymore!?!

Had a nice long chat on the phone with Frances Sorrell Harris. We had not had any contact since 1950. Her husband Bobby Harris, 87, passed away on December 16, 2016. They were married 45 years. Frances was first married to Ben Redfern of Hartsville. They had three children. Margaret Redfern Stephens, 57, had just passed away on March 6, 2017. She had a long illness. Then as we were talking she indicated another daughter Karen Redfern Rogers passed away about a year and one half ago. Her living daughter Berta Redfern Sloody lives in Atlanta. Frances has 2 granddaughters and 5 grandsons. One of her grandsons just got engaged to be married. She lives in Leesburg, Florida. Please pray for Frances. She is a member of a good church and they have been much help to her during this time of her losses.

Jean Fore McDaniel is well for now. Her husband Mac has some health problems also. Their grandson Christopher is in Antartica kayaking. He was in Norway as we spoke. Her granddaughter Erin is working. Both have finished college. The youngest granddaughter was just accepted to UCLA so she will be moving soon.

This is a busy year for me. My third great-grandchild, Conor Patrick Gilligan was born on February 6, 2017. He’s so adorable at 9 weeks old as are the other two great grands. Then on February 11, 2017 my granddaughter Jillian Marie Cothran was married to James Heard from the Memphis area. God was honored at their wedding. Besides the wedding I told you about at the beginning of my news, we have four college graduations (one Masters from Liberty University). Three events have happened now and four more to go!!!

Pat Chapman Huff, Betty Jean Hunsinger, Charlie Hunt Chewing, Sarah Sampson Bell, Sarah’s two sons Joey and Gregg Bell and I attended a great luncheon at Drengaelen house with Dr. Robert Wyatt and Nancy, Dr. Will Carswell, Shelli Wilson, Peggy Smith, Devin Jennings ’12 and Kevin McCormick ’15. They told us of all the interesting things about the college. They are “bursting at the seams” with many more students than ever and many new buildings. The campus is beautiful!!

Hope to see you next time we’re there.

Hope you all will keep well and don’t fall!

Mitzi has told you of our luncheon in lovely Drengaelen after which she stayed overnight with me. We are so fortunate that many of us at our ripe-old age are still living! We wanted to hear from you so we decided to try calling EVERYONE!!!

Everyone I talked with was so warm, loving and appreciative and I cannot tell you what those wonderful phone visits meant. I will attempt to share some of those conversations.

Toula Latto–still in Charleston living on James Island. Very active in her church. Made the remark that her years at Coker were four of the happiest years of her life. So content with her present life.

Nina Franklin–has always lived in Albertville, Alabama. Came to Coker because her Aunt Miss Moody was teaching there. Transferred to Auburn her second year and graduated in Physical Education which she taught many years. Has many friends and loves her life.

Joyce Bell–retired from teaching in LaPorte, Texas. Does lots of volunteer work. Traveled extensively in the past but not much now. Keeps up with her good friend, Charlie Chewning. Happy with her life.

Jane Biggers Brown–in her hometown Concord, North Carolina. Shared sympathy with her on the death of her sister-in-law, our cute Boo Brown Stewart. Married after her freshman year. Asked her if her hair was still that lovely shade of red!! Has four wonderful grandchildren.

Sara Huggins Fowler–lives in Fayetteville, Georgia. Reminisced about seeing some of her Cokernut friends at her Josister’s funeral and how much that meant to her. Still has relatives in Mullins. She came to our 50th reunion and would love to see Coker again. Some health problems but feels fortunate to have supportive family nearby.

Betty Tally Earon–she and husband Blaine living in Flowery Branch, Georgia, but have their house for sale and will move near their children in Jefferson. Blaine played football at Duke and then professionally, his team winning two Super Bowl championships!! They have SEVEN in their family named Blaine for him!! Betty and Jo Bishop Saunders, now deceased, were good friends growing up in Laurinburg, North Carolina.

Teresa Cameron Glasco–back home in Sanford, North Carolina. She was my freshman roommate, and we were so envious of her looking gorgeous at breakfast with no makeup on. She was a former Miss Sanford!!! She and Betty Tally Earon have remained friends all these years. Both went just one year to Coker but have fond memories of those days.

Joan Carter McKissick–married John who holds the record of winning the most high school football games in the United States!!!! He has written a book about his successful career. They are both retired and live in Summerville. Joan worked for the post office and you can guess where she spent thousands of hours!! They attend the same church as my granddaughter and her family.

Helen Coachman Shipley–lives in Fanning Springs, Florida and attended Coker one year. She and I recalled a weekend visit Ina Claire Bryant Odom and I had with her family in Manning. Helen has some health issues but at our age who doesn’t?!! Helen loved Coker and has nice memories of going there.

Everette Gause Stauffer–lives in Hershey, Pennsylvania with her husband. He returned my call and I learned of Everette’s health and his devotion to her. He recalled Everette’s excitement at seeing Charlie Chewning years ago when Charlie was in Hershey and made sure she saw her. Everette, we love you and you are so fortunate to have your husband for support.

Peggy Warren Smith— has been living in Jacksonville, Florida, for many years. She and Jay are one of the happiest couples that I have been around. They ALWAYS came to every reunion we had. Peggy and Jay were married during her senior year at Coker, and some of us went to their wedding in Florence. After their honeymoon, she returned to finish Coker and he reported to military duty, not seeing each other again until she graduated!!!

Catherine Rice Tharin–the nice, nice classmate who endowed a scholarship and later added it to our Class of 1953’s. How unselfish of her. Cat lives in Allendale and stays active in community affairs. When I called, she had just returned from a meeting. Ladies, take notice of her energy!!

News other than my calls include a visit to Beth DuBose Cottingham with Peggy Smith and Shelli Wilson from the college. Beth stays so busy with her church and activities in Kingstree. She and Jo Anne Boyd Sires are close, close friends. Jo Anne cooks Sunday dinner for her big family every week. If Beth can’t be there, someone brings her a plate.

Daphen Yarborough Edge and husband A. J. have moved to the Presbyterian Home near Florence. Daphen is in a cottage while he is in the skilled care unit. The move has been good, for many of Daphen’s relatives live in the area.

Sarah Sampson Bell has lots of things happening in her family. Her son Ronnie had taught and done research for 25 years at Wake Forest Medical School. He has now become Dean of the Health Department at East Carolina University. Sarah has two grandchildren graduating from college and two receiving Master’s degrees this year. She has to be a very proud lady.

Jean Fore McDaniel and Mac spent a short time at their home at Pawleys Island recently. Betty Jean Lee Hunsinger keeps in close contact with them.

Betty Carol Mobley Bynum‘s grandson who is a student at the University of South Carolina was hospitalized with some health problems but since has done well. Our prayers are with him for continued health.

For some reason, I was unable to reach Doris Hickson Maddox, Camilla Richardson Livingston, Lynne Eidson Dudley and Helen McFadden Mixon. I do not have phone numbers for Truey Tarbox Thieker, Jean Stevens Edwards and Elizabeth Wadford Watkins.

I was so honored to be invited and attend a former student’s installation as president of the North Carolina Community College System during April. How proud to see someone you taught do so well in life.

Our family is all excited to have the wedding of my granddaughter, Trish Godbold, and Daniel Barteet next May on John’s Island. This will be my first outdoor wedding as they will be married in his parents’ backyard on the water.

The college is prospering and looking so lovely. I wish everyone of you could see it. I think of the friends I made while there and it’s all of you.