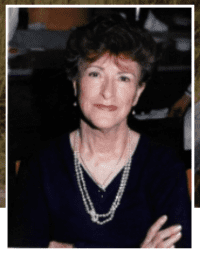 Charlotte, who just celebrated her 57th wedding anniversary on August 3, was born in Lakeland, FL to James Robert Reaves of SC and Dora Davis Reaves of Maine.

She graduated from high school in Dillon, SC and from Coker College, where she received a degree in Spanish and Business Administration. After graduation she took a job with the US Department of State and was assigned to the US Delegation to the UN, until she was posted to the US Embassy in Guatemala. While in Guatemala she met and married Anthony Chillura, a foreign service officer also posted to Guatemla, on August 3, 1963. From Guatemala the Chilluras were posted to Marcaibo, Venezuela where her first son, Anthony Chillura Jr. was born. From Venezuela, the Chilluras were transferred to Arequip, Peru where Charlotte developed and directed the city’s first bi-lingual secretarial school. From Arequip the family was transferred to Lima, Peru where she taught English and directed an “English as a Second Language” program in Peru’s largest bi-national center. While in Peru, her daughter Cynthia Chillura and son Christopher Chillura were born.

When the family was transferred to Washington, D.C., she worked as an office manager for Congressman Leo Ryan of California. From D.C. the family was posted to Rio De Janeiro, Brazil where she managed the US consulate’s commissary and daughter Michelle Chillura was born. A post in Spain followed Brazil. While in Spain, Charlotte worked in the US Embassy Consular office. After Spain the family was again transferred to the US, where she worked at the CIA until she was reinstated to the Department of State and transferred to Spain where she worked in the embassy’s regional security office and then directly as a special assistant to two US ambassadors. At the completion of this 2nd tour of Spain she returned to Washington, D.C. for an assignment in the US Department of State. After her retirement in 1998, the family moved to Mt. Pleasant, SC. Her favorite saying was that her greatest accomplishment was her four children who, to this day, are family-oriented and close.

A funeral service will be held at 3:00 PM on Saturday, August 22, 2020 at McAlister-Smith Funeral Home, Mt. Pleasant, and also broadcast by livestream, because of these times.

In lieu of flowers, memorial donations may be sent to the Lowcountry Pregnancy Center, where she worked for many years, at 7481 Northside Drive, North Charleston, SC 29420.

Expressions of sympathy may be viewed or submitted online at www.mcalister-smith.com.