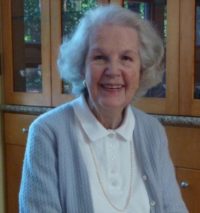 Bertha Mary Wilson Moorman was born on April 5, 1924, in Darlington, S.C. She was the daughter of Bertha Lesesne Briggs and Thomas Evans Wilson, Sr. The youngest of six children, Bert grew up in her beloved mother’s garden and in the fields and woods hunting arrowheads with her father.  She attended Coker University and graduated from the University of South Carolina where she was a member of Kappa Delta Sorority and Beaux Arts. She made many cherished lifelong friends during this time, some of whom joined her in New York while she worked for NBC and, again, upon her return to Columbia while working for Dora Gray Studios, a local decorating company.  She married Robert Moorman III in 1949. Bert and Bobby lived in France and Germany during the early years of their marriage when he was a Fulbright Scholar at the Sorbonne and, later, when he worked for the Department of Education in the United States Army in Darmstadt, Germany. Following their time in Europe, she and Bobby made Columbia, S.C. their home.  Bert was so talented. She was an excellent cook. She was a gifted gardener who delighted in working in her beautiful gardens in Columbia and Little Switzerland, N.C. There were always flowers from the garden in her home, and she was often sharing blossoms with her hostessing friends and plants with her fellow gardeners. Bert restored oil paintings and worked on collections throughout the southeast. She gave her time to the Cub Scouts and to Trinity Episcopal Cathedral. She and Bobby greatly enjoyed leading their friends on trips the world over. She was a member of Trinity Episcopal Cathedral, The Palmetto Garden Club, The Assembly, The Pine Tree Hunt Club, The Palmetto Club and Forest Lake Country Club.  Bert will be remembered as being a lovely lady who, though quite unassuming, possessed many gifts that she shared with her fortunate friends. Her grace, beauty and retiring nature gave her an unmatched elegance. Her family and friendships were nurtured, her home and her gardens were lovingly tended, her time was well spent, and she and her husband, Bobby, were more often than not right in the middle of a bunch of fun.  She is survived by her son, Robert Wardlaw Moorman (Eilene); a daughter, Bowe Venable Moorman Pritchard (Edward); her grandchildren, Robert Wilson Kennemur, Lt. Edward Kriegsmann Pritchard IV, USMC, Peter Lesesne Pritchard and Celeste Venable Pritchard; Dennis Bruce Kennemur; numerous nieces, nephews and relatives. She was predeceased by her husband; a daughter, Mary Devonald Moorman Kennemur; her brothers, Thomas Evans Wilson, Jr., Theodore Lesesne Wilson, William Coker Wilson II, John McLean Wilson; and her sister, Suzanne Wilson Rogers.  A memorial service will be held at 4:00 p.m. Thursday, January 19, 2017, at Trinity Episcopal Cathedral, with visitation in Satterlee Hall following the service. Burial will be private. Dunbar Funeral Home, Devine Street Chapel, is assisting the family.  Memorials may be made to Trinity Episcopal Cathedral, 1100 Sumter Street, Columbia, SC 29201.