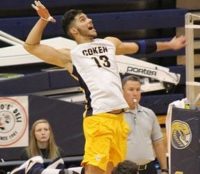 Cabral will compete for the professional men’s volleyball club during the 2017-18 season.

“It is a traditional team that will play against all of the best professional clubs in Brazil,” stated Artur Cabral. “This will be a huge challenge in my young professional career and I’m honored to be a part of this club.”

“I am extremely proud of Artur, he’s worked very hard to get to this level,” said head Coker volleyball coach Julia Rowland. “I know he will do great things at the next level and I’m looking forward to following his team and becoming a fan of Santo André Super Vôlei.