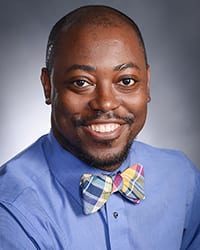 James graduated from Coker University with a B.A. in communications and went on to receive his Master of Science degree in college student personnel services and administration from the University of Central Arkansas.

As a student at Coker, James was active in campus life, a characteristic that influenced his future career. James’s professional path involves supporting students and their college journeys.  He has worked in various capacities at the South Carolina Governor’s School for Science and Mathematics, Claflin University, Central Baptist College and the University of Central Arkansas. He has volunteered at Christ Central Ministry’s Wagener Women’s Well since 2011.

In his spare time, James enjoys being a DJ around campus and at area events, a career that began at Coker University when he spent many evenings entertaining in the Cobra Den.