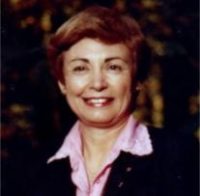 Funeral services for Mrs. Ruth Byrd Galloway, 85, who passed away on Friday, June 9, 2017, will be held at 1 o’clock on June 17, 2017, in The Chapel of Brown-Pennington-Atkins Funeral Home, The Rev. Dr. Dalton Ward officiating. The family will receive friends one hour prior to the service. In lieu of flowers, donations may be made to Hospice & Palliative Care Charlotte Region, 1420 East Seventh Street, Charlotte, NC 28204. Mrs. Galloway was born in Darlington County, SC, on April 18, 1932, the oldest of three daughters of the late David Clarence Byrd, and Hyacinth Blalock Byrd. Cainie Ruth was a devoted wife and mother. She was a good and generous friend to many throughout her life in Columbia, SC and in Chapel Hill, NC where she previously lived. Her dear classmate friends growing up in Darlington and Hartsville always remained close to her all of her life. She attended Furman University in Greenville, SC and received her Bachelor of Arts Degree from Coker University, in Hartsville, SC. She received her Master’s Degree in Gerontology and Adult Education from the University of North Carolina, at Chapel Hill, NC. She was retired from the South Carolina Department of Education where she was a consultant to the Office of Adult Education. After spending 10 years as a full-time Mother raising her daughters she worked for the Orange County Council on Aging in Chapel Hill, NC. Ruth is survived by her husband, Heyward Furman Galloway Jr. of Charlotte; a daughter, Sharon Cooke Padgett and husband Scott Rae Padgett of Charlotte; a sister Phyllis Blackman and husband Ned Blackman of Hartsville, SC; a sister Jean Smoak of Mullins, SC; and a number of nieces and a nephew. In addition to her parents, she was preceded in death by a daughter, Pattie Annick Cooke. Upcoming Events Visitation Jun 17 12:00 PM 1:00 PM Brown-Pennington-Atkins Funeral Home Chapel 306 W Home Ave Hartsville, SC, US